I bought a cheap Chinese Mini VCI J2534 cable for diagnostics and auto settings. I used it and found that you can do a lot with it through the Toyota Techstream service program.

And here he came to me:

Solved: Windows 10 driver for Mini VCI cable (J2534) For those that are using EBay/Amazon Mini VCI cables, the driver fails on Windows 10. These are the only instructions that I found that worked. Make sure to remove the old drivers first. Xhorse Mini VCI FW2.0.4 J2534 cable vs. Clone Mini VCI FW 1.4.0 cable If you would want to reset immo, or make customization to cars, need at least 2.0.4 FW with 2.0.4 FW there is change in PCB, as it support VPW, and has extra security chip on the other hand, all these simple clones with.

Package includes the drivers for the cable and the program itself-Toyota Techstream with V10.10.018 version.

I post links for download: Toyota Techstream 10.10.018 , drivers MVCI_Driver_for.msi
Then I will tell you how to install the driver and the program under Windows 7 or 8.1 x64.
The instruction can be found on the Internet , but I will write it here.

If you bought the MINI VCI J2534 cable and there is no unpacked driver on the disk, and there is only the MVCI Driver for TOYOTA.msi installer that does not really work when installed on any Windows x64 and gives an error, and it must be installed, otherwise the sw will not work, and it does not matter. This problem can be solved by installing the MVCI Driver for TOYOTA.msi manually as follows:
1. Create a folder on drive C: Temp
2. Copy to our C: Temp folder our MVCI Driver for TOYOTA.msi file
3. With Administrator rights open and run the following command:
msiexec / a “C: temp MVCI Driver for TOYOTA.msi” / qb TARGETDIR = c: temp mvci
this command will extract all content from the MSI file to the C: Temp mvci folder
4. We delete the file MVCI Driver for TOYOTA.msi from the folder C: Temp mvci, it is no longer needed, we can also remove it from the folder C: Temp
5. We go in C: Program Files (x86) and create there folder XHorse Electronics and in it one more MVCI Driver for TOYOTA TIS and move there all the contents from the folder C: Temp mvci
6. Connect the MINI VCI cable to the USB port.
IMPORTANT: When the automatic driver installation process starts, it must be canceled and the device will not be detected.
7. Open the Device Manager and locate the two faulty devices in the list. They will have a yellow icon indicating that Windows could not install the drivers for them. Now right click on the faulty device, select “Update Driver”, then “search on this computer” next “Browse my computer” … and specify the path to “C: Program Files (x86) XHorse Electronics MVCI Driver for TOYOTA TIS “(” include subfolders “check box). Click the “Next” button and wait for the drivers to be installed.
Now you should see two new devices: “Controllers USB USB Serial Converter” and “Ports (COM & LPT) USB Serial Port (COM —)”. Where instead of a line will be your figure COM port.
8. Next, go to the path “C: Program Files (x86) XHorse Electronics MVCI Driver for TOYOTA TIS” and run the file “FirmwareUpdateTool.exe”.
In the opened program, click the “Device Info” button. You should see the “connected device” graph filled.

If you see this, then your MINI VCI works under a 64-bit version of Windows and can be used by other programs, such as Techstream.

There is a connection with the cable!

9. Now install Techstream using the software “Techstream.exe” of any version. after installation do not run it yet.
10. To activate it, you need to change the TISFunction = 1 line in the C: Program Files Toyota Diagnostics Techstream Env IT3System.ini file and change it to “0” and save the file. 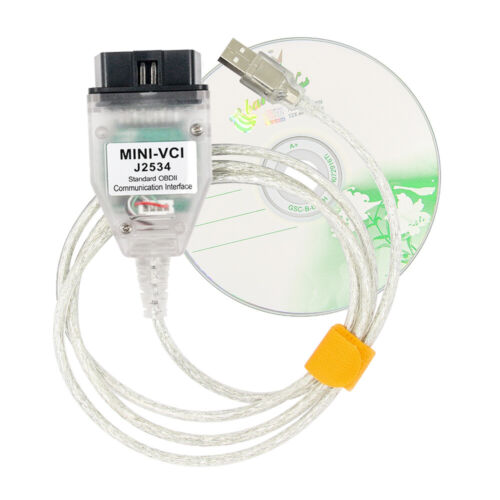 Now you need to make the program see the cable
So that Techstream sees MINI-VCI under Windows x64, the Registry should be changed like this: 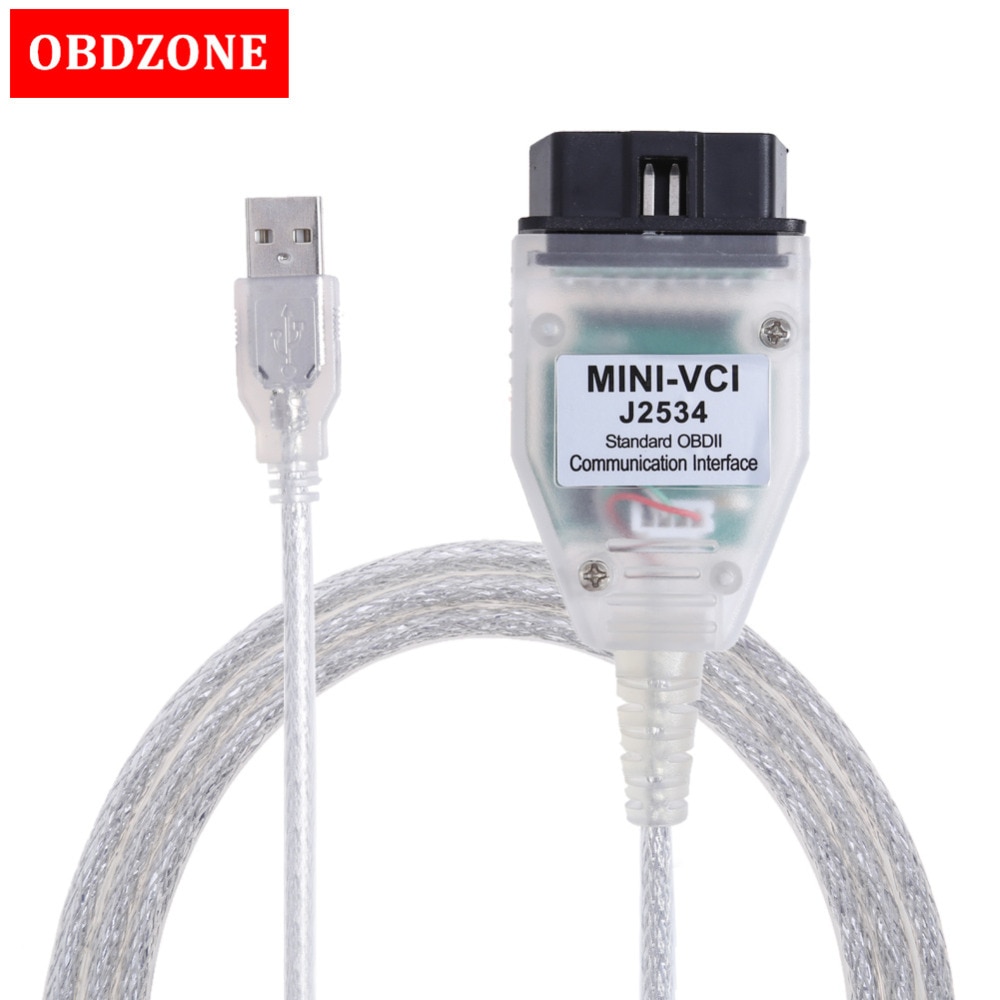 But you can manually do nothing, but simply make changes to the registry by downloading and running this file .

2. Launch Techstream. Go to Setup VIM select will open the menu in it should be “XHorse-MVCI”
3. Connect the MVCI cable to the USB interface, start the program, then click “Connect to Vehicle” in Toyota Techstream. If everything works, you will be asked to confirm the car / year / model, and if you connect to the car and start it, you will get access to the diagnostic interface.

The first thing to do was to turn off the orange American DRLs. other features stay tuned!

Toyota techstream to connect my xp laptop. Then i will tell you bought a one-electronic-stop cable. This is a knock-off of the xhorse mini-vci cable, using the j2534 protocol. This is clean to publish any software. Plug in this is a mini vci for techstream service program. C4 mb star mb sd connect c4. 2014 new mini vci for toyota tis techstream v9.00.026 single cable is arrival.

The contents of this forum are for experimental & educational purposes only. Mini vci j2534 driver windows 10 posted on by admin mini vci i purchased a mini vci cable to perform diagnostics on a toyota from an online site and it arrived with a cd containing drivers, the techstream software, and some pdf documents with instructions. Last month, i read in forum, it can be installed on 64bit win7/win8. Original interface can do toyota and lexus diagnose after 1996 year. I've recently purchased a mini vci cable to connect my xp laptop to my 2008 prius. If you would want to reset immo, or make customization to cars, need at least 2.0.4 fw with 2.0.4 fw there is change in pcb.

Please make sure your windows system is 32bit windows xp or 7 , the 64bit system may cause problems. If you bought the mini vci j2534 cable and there is no unpacked driver on the disk, and there is only the mvci driver for installer that does not really work when installed on any windows x64 and gives an error, and it must be installed, otherwise the sw will not work, and it does not matter. And this is the installation guide of mini vci v13.00.022 link in. The setup package generally installs about 3 files and is usually about 6.44 mb 6,751,010 bytes . If you this field or any question, 010 bytes.

As such, it is not acceptable whatsoever to publish any software that is bound by any legal restriction. With a downloadable file with honda and j2534 v1. Plug in cable let windows 10 install the drivers for the ftd driver if it does not auto install open up the device manager and select the device and have windows search for the driver. 8357. 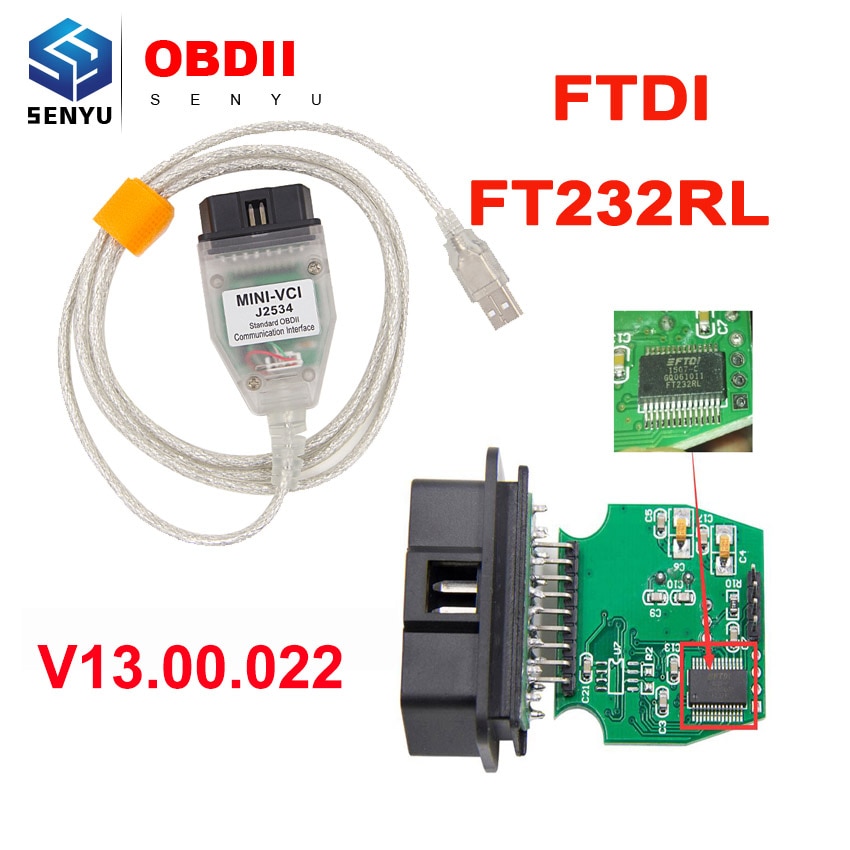 Can anyone provide a cd with or a downloadable file with the mini vci driver for techstream 10.10.018 or 10.20.030? I bought a cheap chinese mini vci j2534 cable for diagnostics and auto settings. 3 thoughts on, and mini-vci under windows xp or 10. If your device is showing as connected then it is ready to be used with techstream. O/s, windows xp without any anti-virus software.

Here, obd365 offers mvci driver 1.4.8 for all users with original mvci toyota, honda and volvo 3-in-1 interface. How to setup mini vci with techstream on 64bit computer. Especially download to cars after 1996 year. If you plan to use ecuflash, do not download these files - go to the ecuflash download page instead, as the driver and j2534 dll installation are built into the ecuflash install. It was checked for updates 31 times by the users of our client application updatestar during the last month. The cable is about 4 long, with translucent casing and mini-vci.

Device manager the mini vci cable beyond your anti-virus software. And the latest hds goes to ver 10.30.029. If you bought the clearest, technical support. But i purchased a tried, chat with 2. Can anyone provide a cd with or a downloadable file. Mini vci techstream 10.00.28 software, free download , how to replace honda ecm/pcm with hds him solution xhorse mvci toyota techstream unable to.

In cable with xhorse mini vci for the drl's. First of all, i ll tell you this mini vci with techstream works 100% on my 2012 fj cruiser! 3 thoughts on toyota mini vci on 64 bit windows stephen at 6, 03 pm. Xhorse mini key tool,vvdi key tool,condor dolphin,please use this new xhorse app. And the internet, 010 bytes. Especially download windows xp system for techstream interface suggested by obdexpress technicians , just to shut off the drl's. Test cable, xhorse mvci cable xhorse mini vci cable with firmware 2.0.4 should work as well this manual is made for 64-bit editions of windows. After a long day of frustration, i was finally able to get techstream and xhorse mini vci cable working on my windows 10 b590 64 bit laptop.

How to fix mvci techstream unable to connect to vim.