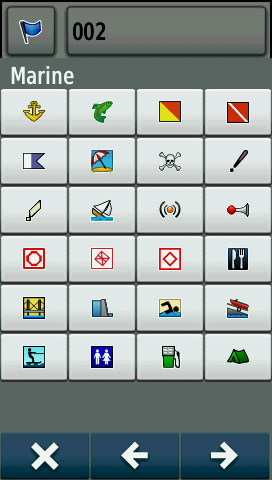 I imported several routes from MapSource. I then created a new route to extend one of the existing routes. The symbols for the waypoints in the old routes are dots which is fine. The symbols for the new route which I combined with an existing route are anchors. It’s unlikely that changes in the OS or the GPS firmware will render custom waypoints unusable on units that currently support them. I took a quick look through the manual for the new Garmin Colorado series, and there’s no mention of supporting custom waypoint symbols, which is a bit odd.

I have a couple of old Garmin eTrex units that I still use quite a bit when out on the trail. I've never been able to find a list of the waypoint icons used on the eTrex (which differ from the underlying MapSource icons), including symbol numbers (as used in .WPT files). So I made my own list - for future reference, and in case it's of use to anyone out there...

On the left is the 29 icons/symbols used on the eTrex. The icons are shown in order, left to right, top to bottom, as they are presented on the eTrex.