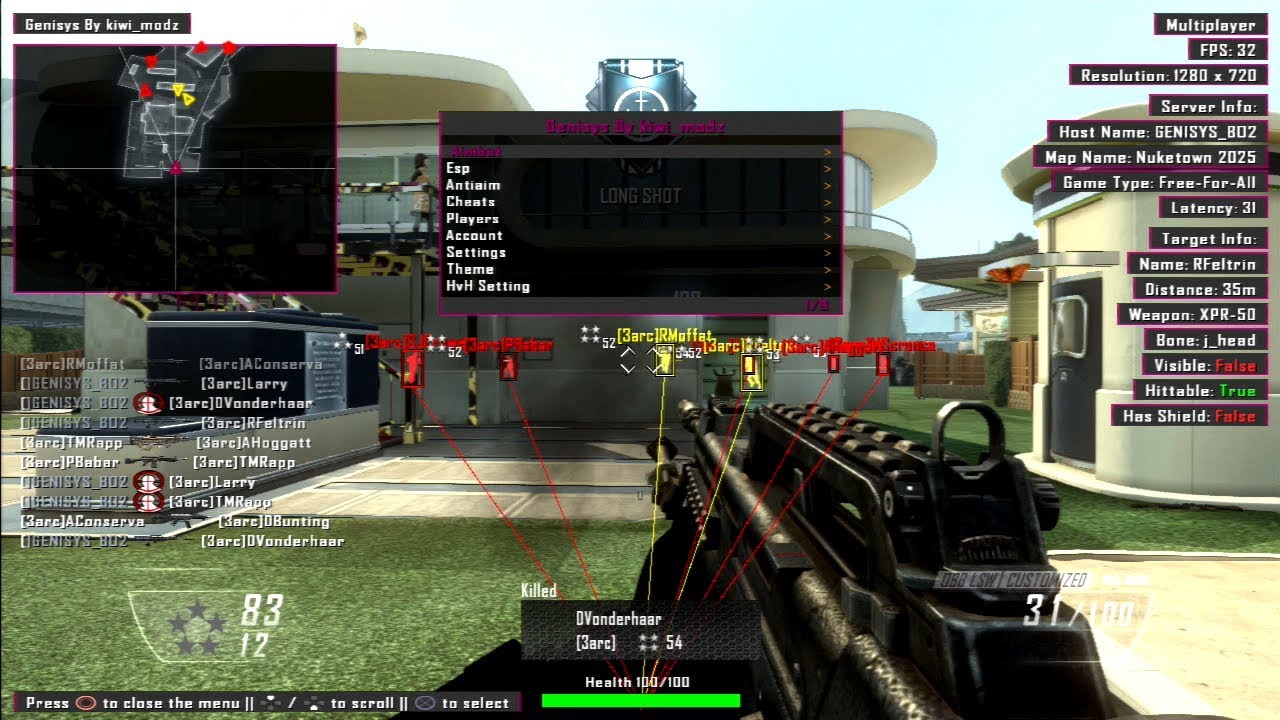 Happy Zombie Hunting!
BO2Z Toolbox-
BO2Z Toolbox is designed to be used on the Plutonium
version of Black Ops 2 Zombies in lan mode, this tool makes
no attempt to bypass or evade anticheat. If you use this tool
online, you do at your own risk and most features probably
won't even work.
Running BO2 in windowed mode will allow you to use
the menu ingame by pressing the menu hotkeys. Even
though in windowed the game still looks like fullscreen.
Then press hide hotkey to close the menu. Hotkeys can
be changed in settings.
New In 2.4:
Version 2.4:
-Fixed No Gun
-Fixed Player Speed
-Fixed FOV
-Fixed Gravity
-Fixed Inf Melee Range
-Fixed Gun View Model
FEATURES-
Teleport zombies
god mode, ammo, lock spread, give cash, rapid fire, gravity, playspeed, timescale, auto semis, teleport & more
Customizable colors and hotkeys
Run Black Ops Zombies 2 in window mode and press the show hotkey to bring up the menu then hide hotkey to close it
VIDEO-
GUI-
Thanks to:
-NeWaGe
-New Age Software
DONATION-
Bitcoin - 145t1gw7popBFpr6NsfQF6HR1kGT6jNpJ7
Download:
Password: fearless

Plutonium T6 is a custom, feature rich Black Ops 2 (T6) client released on April 13, 2018. The CoD modding community has waited for a BO2 client ever since Redacted shut down, and the Plutonium team has made it happen. And, unlike previous attempts at BO2 mods, it not a copy and paste of the Redacted code but a fresh take on a fan favorite CoD title that adds new possibilities never seen in any other T6 client.

What can you expect from PlutoT6? Dedicated servers and an in-game server browser are included. There is an active anti-cheat system which will enable automatic banning globally when cheats are detected. Additionally, Iw4madmin has been made compatible with PlutoT6 Ported maps from other CoD titles are available including Skidrow and Rust and, recently, GSC mod support for weapons, camos, and other server mods has been added. For zombies, you can expect the player cap to be increased from four to eight.

Plutonium T6 Is The Client of Choice for Pro Tournaments