Advance Map is the most used map editing tool for GBA games.

Ok guys, I don’t want to create another tutorial on Advance Map, you can easily find one by searching the net.

I personally like link12552’s one, because it’s very complete :) , the link is below:
http://www.pokecommunity.com/showthread.php?t=161616
Below I will mirror it given that the original one doesn’t have working images.

Before we begin: REMEMBER TO ALWAYS BACKUP YOUR ROM!

3. Fill out the required information

Areas are the places that make up the world in your game. They can be forested, mountained, towns, cities, deserts or anything else you can come up with. They are literally what makes a game interesting. Sometimes though people can make locations that really turn you off from a game.

Considering the two forest areas above, which one looks better? The right one of course!
While the right gives a more natural feel, the left just sort of hurts your eyes.
A few tips when making areas are:

Known in Advance Map as “Movement Permissions”, this is what is going to tell the game when and where players can or cannot move. This is easily editable through the movement permission tab.
Some of the basic movement types are:

Events are one of the most important things when making a game, but what exactly are they?
I define an event as something that changes or has the potential to change and display other events or information.

The types of events are:

Warps, in a simpler term, are blocks that when stepped on will send your character to another map.
They are set up as follows:

In this warp, we see that the player will be sent to Pallet Town, warp no. 0

What exactly is a sprite?
A sprite can be many things. It can be a blazing fire, a boulder blocking the way, a sign, just a person, or almost anything else you can come up with! In other words, a sprite is an animated, moving, event.
Sprites unlike other events contain many properties. These are all needed to tell the game how to display the sprite.

OK, some of you may be saying to yourselves, “I thought this was an Advance Map tutorial, so what does scripting have to do with this?”.
Yes, true; this tutorial is for advance map, but one type of event is a script.
Scripts are activated when stepped on.

In this script when stepped on, a box will appear saying, “It's impossible to SURF between the islands ...”
The offset $17184A would be put in the offset property of the script.

A signpost is the most generic of the events. It’s usually just used as its name implies, as a signpost, although a signpost can also be used as a hidden item (or secret base in ruby, sapphire, emerald)!

Anyone who has ever played a Pokémon game knows about wild Pokemon. The game practically revolves around them, but how exactly are they set up?

In the area above, how would you catch wild Pokémon?

The Pokemon seen on each map can be edited through the wild Pokemon tab.

Map connections are used to create smooth transitions from one map to another automatically during game play.
Clicking the arrows will take you to the connected map.

Once in a while you may come across time when you want to completely remove a map from your game. Ordinarily this can’t be done, but this is how.
Before continuing make sure you back up your rom!
First of all there are two ways this can be done. The safe way or the complete way depending on the intention.
Safe way:
Just reuse the map! Turn it into something completely different instead of completely removing it. All that really has to be done is change the size and tile-sets, and then your ready to recycle.
Complete way:
Sometimes a map can just go bad for one of many reasons, and the best thing to do is completely obliterate it! This method, although, can be pretty messy. For this to work the map you want to delete must be at the end of the bank. 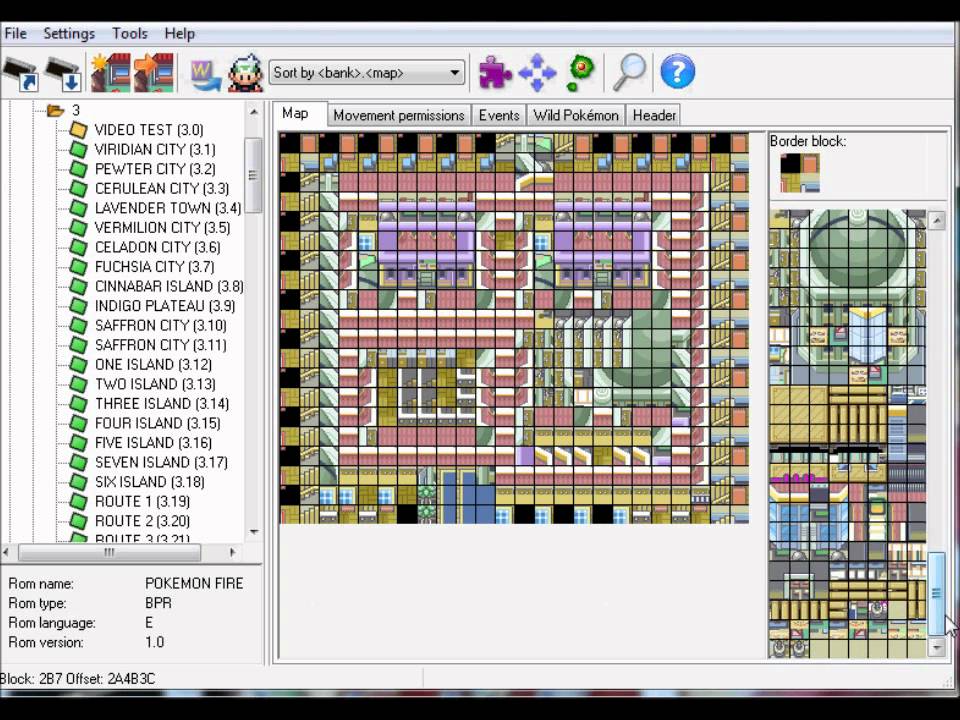 If the map is not at the end of the bank, save all of the good maps in the same bank somewhere. Then delete all the maps in the bank. When your done insert the good maps back into your game.
For this example 13.1 is the last map in bank 13 so this will work.
Open the map you’re going to delete.
Then go to file> map> insert map
Click “Map bank header”
Scroll down to the map’s bank and in the text box type -1
Press “Accept changes”

Finally replace the map with itself.

Many errors will show up, this is normal. Just keep pressing Ok. Finally if all goes well, the map will have been removed from the game.

Tiles, like most other things, are able to be interacted with in the game. Examples of which include: the tall grass, the PC and even warps. Tile events are edited in the first text-box of the Behavior byte:

People ask me a lot why a warp on their map isn’t working and it usually comes back to a tile issue. A warp will not run if the tile it’s on does not have the behavior byte 61 00.
If you look, the byte 61 means use warp.
Some Behavior Bytes:

Some people have a lot of trouble when it comes to making bridges, so here is an explanation.
A bridges movement permission is 3C. There must be 10‘s though, at the ends, to show the bridges’ elevation.

The next part is what usually confuses people. The actual bridge tile’s behavior has to be set to 08 00 for overland brdiges or 70 00 for bridges over water.

At some point in your game you’re going to want to make a person leave the map right? Well here’s how. Remember is sprites I briefly mentioned a sprites person ID and that was used to make a sprite disappear or reappear.

Set the sprite’s Person ID to a flag in the game (i.e. flag 0x250 would be ID# 0250)
When the corresponding flag is set using the setflag comand the sprite will disappear. Releasing the flag will make the sprite reappear
The below code would make any sprite with the person ID 0250 not be displayed. Code:

There are many issues people might have when making a map. So here is a list of some common ones and their solutions.